From Plant Ontology Wiki
Jump to navigationJump to search

This page is under construction...

The former plant structure branch of the PO was renamed from Plant Structure Ontology (PSO) to Plant Anatomical Ontology (PAO). The namespace for all anatomical entities is now plant_anatomy, instead of plant_structure. The default namespace for the PO remains plant_ontology, and all PO term ID's will continue to begin with "PO:"

This change reflects the new root term plant anatomical entity (PO:0025131), which was added during the January 2011 release. It also better reflects the content of this branch of the PO, which includes not only plant structures (PO:0009011), but also plant anatomical spaces (PO:0025117) and portions of plant substance (PO:0025161).

New subsets for bryophytes, pteridophytes and gymnosperms were added, in addition to the existing subset for angiosperms. These subsets can be used to search for or filter classes that are relevant to particular taxa.

Please note that inclusion in a subset does not formally imply the class is only applicable to that subset (although that may be the case).

Classes that apply to all plants (e.g., sporangium), are not necessarily placed in subsets, therefore, searching for terms in a taxonomic subset will not find all of the PO classes relevant to that taxon.

Changes to the top level of the PAO

Where appropriate, disjoint_from relations were added among the top level plant structure terms. These relations help to insure that annotations go to the correct class, and can aid in logical reasoning.

Partonomy of plant structures no longer rooted in whole plant

This term was needed to describe structures that would not fit in any other category.

Definition: A plant structure composed of two or more cardinal organ parts from adjacent organs and any associated portions of plant tissue.

Like trichomes, rhizoids can be either uni- or multi-cellular, which prevents us from defining them as either a plant cell or a portion of plant tissue, so we created a separate upper-level term for rhizoids.

Many types of rhizoids develop from a type of epidermal initial, and could be classified trichomes. However, making rhizoid a child of trichome would have prevented us from including protonemal rhizoids in the same category.

Definition: A plant structure that is a uniseriate filament with positive geotropism and without chlorophyll that grows from a plant structure such as an epidermis or protonema.

Comment: May be unicellular or multicellular. Serves to anchor the plant to the substrate, and may function in nutrient and water uptake. Usually lacks chlorophyll. Includes epidermal rhizoids that grow from the epidermis of bryophytes and pteridophytes in the gametophytic phase or from the stems of some monocots, protonemal rhizoids that branch from a protonema, and rhizoids that develop from a basal cell of a gametophore bud.

In addition to asserting dual inheritance for all in vitro plant structures, we renamed all terms to include "plant" in their names and to remove ambiguity from their names (e.g., leaf-derived cultured plant cell, instead of cultured leaf cell). We also modified the definitions to make them clearer and convert them to the genus-differentia form. Two new in vitro plant structures were added: cultured zygote-derived plant embryo (PO:0025304)and microspore-derived cultured plant embryo (PO:0025305).

New structure for in vitro plant structure and descendents:

Changes in embryo plant structure and its children

Here is a picture of how the inference works: 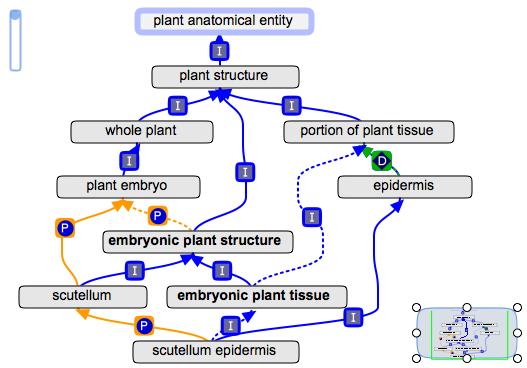 Classes that do not have a sibling term for seedlings:

The definitions for some of these terms were modified

New classes that have a sibling term for seedling:

Other changes to embryo plant structures:

Updated definition of hypocotyl and made it is_a stem internode, instead of is_a cardinal organ part.

Updated definition of epicotyl and made it is_a stem internode, instead of is_a embryonic plant structure.

More details on relations is available at Relations in the Plant Ontology.

The participates_in relation provides a link between an independent occurant in the PAO (a plant anatomical entity) and a continuant in the PGDSO (a growth and developmental stage).

Used to indicate that one plant structure succeeds another across a temporal divide in such a way that at least a biologically significant portion of the matter of the earlier structure is inherited by the later.

This is particularly useful when there is a need to organize concepts under multiple ontology classes, because the primary class can be asserted, and the other classes can be inferred by the reasoner.

For this revision, the intersection_of relation was added for two classes of structures:

See above for more details of embryo plant structure.

To accomodate this request, the following changes were made to the PO hierarchy:

After extensive discussion, we decided to obsolete three existing terms for septum and replum, because there seemed to be some confusion as to where annotations should go. Many species have septa in their gynoecia and fruit, but in Brassicaceae and some legumes, there are repla.

All annotations from TAIR should go to ovary replum or fruit replum.

ovary replum (PO:0025272): A portion of ovary placenta tissue that divides an ovary into two or more chambers and develops from contact of the placental tissue from opposite sides of the ovary early in gynoecium development.

Comment: An ovary replum develops along with the ovary and has no suture line in its center, while a true ovary septum (PO:0025262) is derived from the fusion two adjacent ovary walls. Common in Brassicaceae. Annotations for Arabidopsis should go here, and not under ovary septum.

fruit replum (PO:0025267): A portion of fruit placenta tissue that divides a fruit into two or more chambers and develops from a replum.

Comment: A fruit replum develops from the ovary replum and has no suture line in its center, while a fruit septum (PO:0025262) develops from an ovary septum via the fusion of two adjacent ovary walls. Common in Brassicaceae. Annotations for Arabidopsis fruit should go here, and not under fruit septum.

septum (PO:0000030): A collective organ part structure composed of two or more layers of various tissues that is a partition that divides a cavity formed by the fusion of two or more organs.

Comment: A septum is formed by the fusion of the walls of two adjacent organs (ovary walls or anther walls), for example, the partition between two sections of an orange, seen in cross-section.

ovary septum (PO:0025262): A septum that divides a multilocular ovary.

Comment: Found in species with syncarpous gynoecia (fused carpels). An ovary septum is derived from the fused walls of two adjacent carpels, while a replum (PO:0005016) develops from early contact of placental tissue from opposite sides of the ovary. Annotations for Arabidopsis should go under replum, not under ovary septum.

fruit septum (PO:0025268): A septum that divides a cavity or mass of tissue in a fruit and develops from an ovary septum.

Merged meristermoid (PO:0000070) into initial cell (PO:0004011). New definition: A meristematic cell that by division gives rise to two cells, one of which remains meristematic, while the other is added to the plant body.

Comment: Initial cells are often part of a portion of tissue that is composed mostly of somewhat older, differentiating cells. The division of an initial cell is often uneven, with the smaller daughter cell remaining meristematic.

Guard mother cell now develops from stomatal initial, instead of both epidermal initial and meristemoid.

We couldn't find examples of other patterns of stomatal development. If users come to us in the future with different developmental patterns in other species, we can modify accordingly.

More that 40 new terms were added to the PO at the request of the Physcomitrella group.

In addition, 44 associated new terms were added that can be used for pteridophytes and bryopytes

21 existing terms got new synonyms or minor modifications to make them applicable to a broader range of plants.

The new terms for bryophytes and pteridophytes are summarized in this spread sheet: Media:NewBryophyteTerms_May2011releasePO(RW20-05-2011).pdf

-Users who want to make an association to one of these structures should be sure to annotate to both the leaf part (e.g., leaf epidermis) and the correct type of leaf (vascular leaf or non-vascular leaf).

-Existing annotations for any of these terms should also be copied to vascular leaf (assuming they are all from vascular plants).

Term name (id) number of annotations (from live AmiGO, not from most recent association files)

Added "plant" to the name of embryo and its descendents:

Renamed parts of the anther wall:

Changed names of child terms of sporangium/spore capsule to be taxon neutral:

Added new synonym type "plural". Used for terms that have Latin names that change in the plural. For example, gametangia is a plural synonym of gametangium.